Hunter Fan Company from Tennessee, USA has been producing high-quality ceiling fans for more than 130 years. The business counts amongst the worlds biggest manufacturers of fans and is widely regarded as the pioneer of modern electric fans. The passion for traditional craftsmanship continues to be a driving force behind the establishment and is combined with state-of-the-art technology of the 21st century.

Hunter ceiling fans fulfill a variety of demands: they are an energy-efficient ventilation appliance on one hand and a stylish design element on the other hand. Some models even incorporate a light kit. This combination of design and functionality is one of the main characteristics of Hunter fans ever since the beginnings in 1886. The superior service life of the fans is another key feature. In fact, the company issues a lifetime guarantee for the fans in the US. This term is inadmissible in most other parts of the world but nevertheless it means you can be sure of your Hunter fan’s superior manufacturing.

The Hunter product range covers everything from ceiling fans and portable fans to air purifiers and humidifiers. The brand is known for technological innovation and extraordinary quality. In our creoven online store we offer a wide selection of the most popular Hunter ceiling fans suitable for 220-240V voltage. 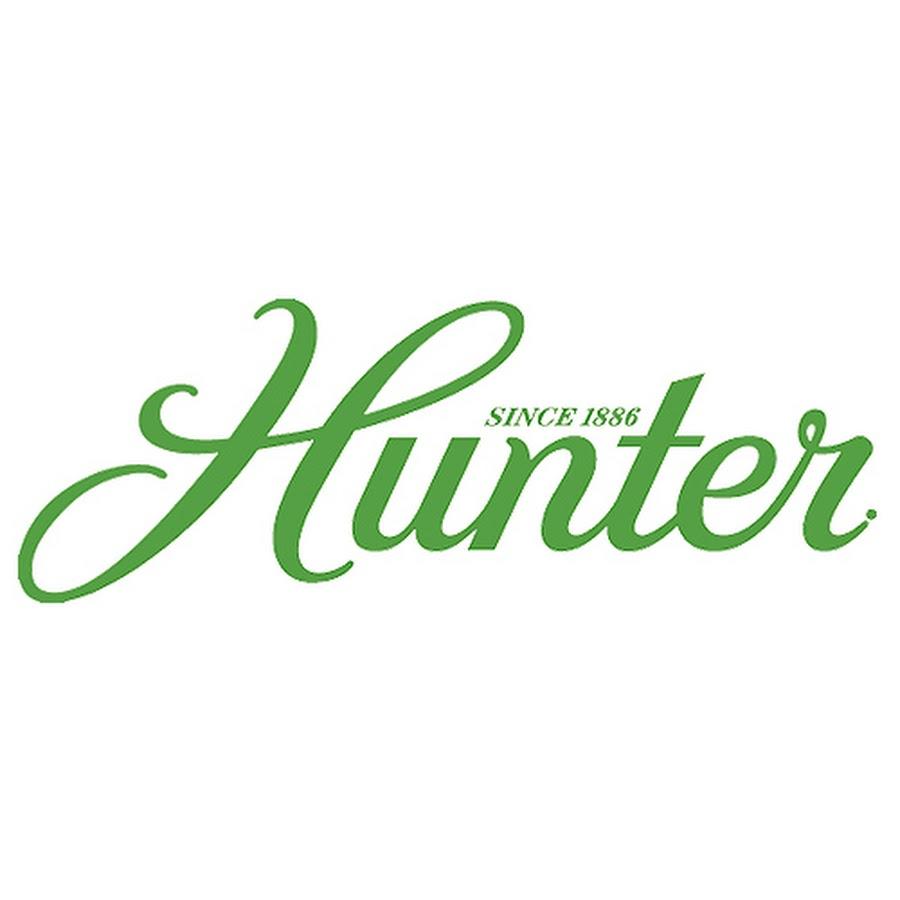 
The ENERGY STAR was introduced in the US by the Department of Energy and environmental agency EPA in 1992. This environmental label distinguishes products with superior energy efficiency. The Builder Elite fan is rated with an Energy Star, to name one example from the Hunter range. 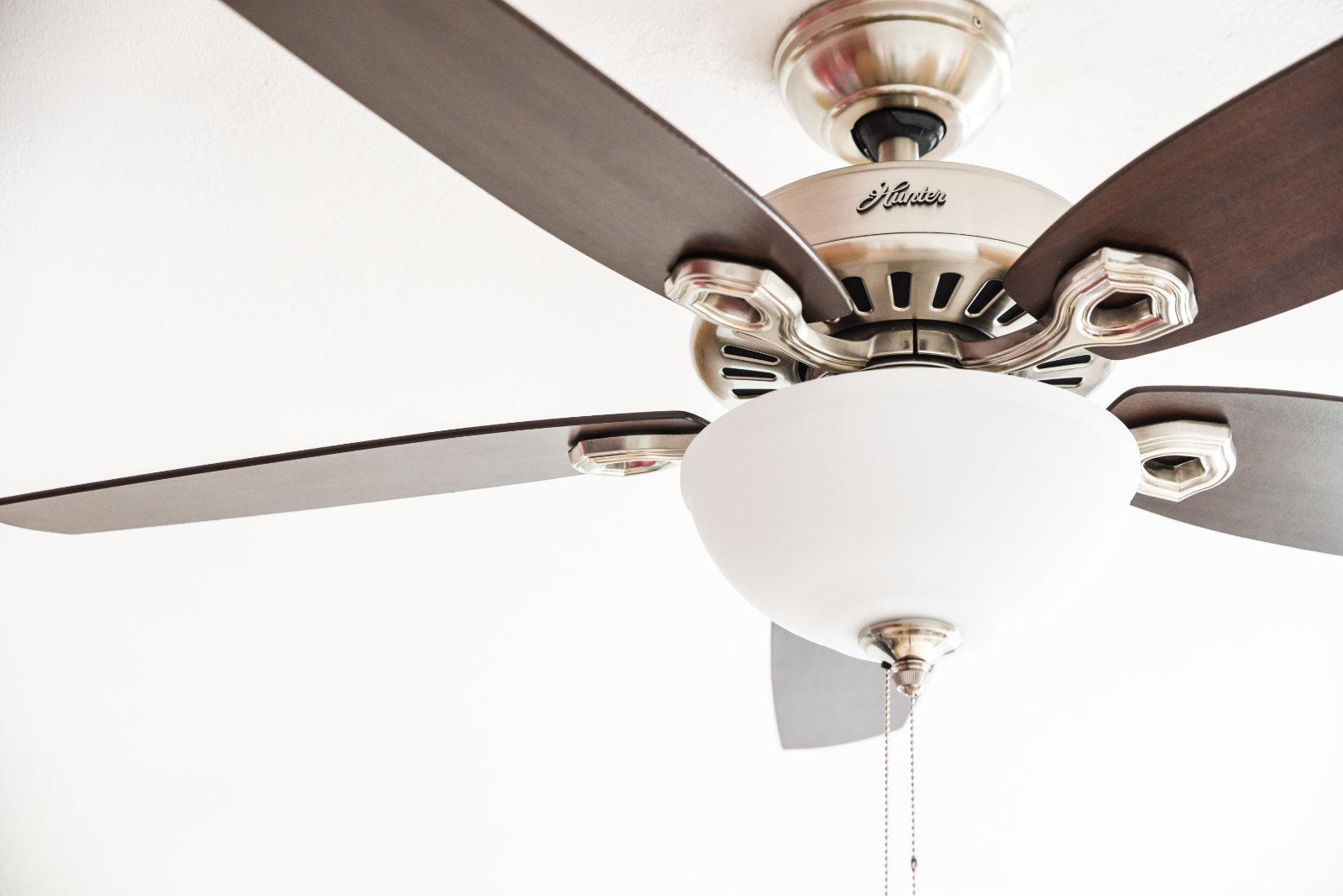 Find out which Hunter fans with and without lights are rewarded with the Energy Star on the official website ein.

The year is 1886. The Statue of Liberty has arrived in the US, Coca Cola is being developed and father and son duo John and James C. Hunter purchase interest in the Tuerk Water Meter Company. The two Irish immigrants contributed their part to world history, soon they would be known as pioneers in ventilation technology. A water-powered, belt-driven ceiling fan with two wooden blades was developed in the same year. In 1896 the Hunter family buys the rest of the company interest and changes the company name to Hunter Fan & Motor Company. The first modern product with an alternate current motor is honoured with the name Tuerk Type A.
The General Electric shaded-pole motor for alternating current is used for fans beginning in 1906. In 1920 oscillating desk fans become part of the Hunter product line. Mr Peoples from the Electric Fan & Motor company buys Hunter three months before the disastrous market collapse that would cause a worldwide economic crisis and a period called Great Depression. Despite hard times the business stands its ground and buys interest in the Centruy Eelctric Company in St. Louis in 1936. Pedestal and extractor fans are added to the range. In 1938 the business is renamed Hunter Fan and Ventilating Company. During the Second World War Hunter faces new demands. They now produce extractor fans for army hospitals and barracks as well as portable ventilation devices for the US Navy. After the end of the production is relocated to Memphis, Tennessee in 1946 to profit from the industrial boom in the region. A young Elvis Presley would move to Memphis just two years later, by the way.
Robbins & Myers buy the Hunter company in 1949 and also move their production to Memphis. The annexe to existing buildings for new staff and devices was finished in 1964. Apart from fans, motors are produced to be used in typewriters. IBM is a notable customer. The first energy crisis in 1973 causes many private customers to switch from elaborate air conditioning systems to much more efficient ceiling fans. So much so that Hunter has a waiting list of up to 12 months in 1978 due to skyrocketing demand. Hunter invests in large advertisements in the Washington Post with provocative slogans such as ”Keep cool for peanuts, Mr. President“. Despite everything though, owners Robbins & Myers believe ceiling fans to be little more than a short-lived fad. After two years of loss because of new competitors they sell the company in 1984. The buyers are six Hunter senior managers lead by William C. Clouspy. The visionaries believe in the century-old business. The shortened name Hunter Fan Company is introduced.
In 1986 climatisation devices are added to the range and the expansion results in an enormous increase of turnover in 1989. Starting in 1993 portable air purifiers and humidifiers are sold. Other innovations in 2000 are bathroom fans, the five-minute fan (90% pre-assembled) and a ceiling fan with integrated audio system. Hunter has three branches by 2009 and sells products worldwide. In 2011 the company celebrates 125 years of business. New CEO Mr John Alexander includes industrial fans and smartphone-controlled domestic fans to the segment in 2016.

Check the official facebook information / milestone page for pictures of James C. Hunter, the first ceiling fans and the company picnic on the occasion of the 125 years celebrations.

Inventor of the ceiling fan?

The history of Hunter fan manufacturing is closely linked to the history of ceiling fans in general. John Hunter and his son James are regarded as the producers of the world’s first ceiling fans. According to the company John Hunter was actually the one who invented ceiling fans in the first place. This is not quite correct though seeing that steam-driven fans were used to ventilate ships and ceiling fans with an electric motor were already used and patented. Many technical accomplishments and modern comforts build on each other. Sometimes the time is ripe and many similar ideas come up in the same decade or even year. It is a fact though that Tuerk Water Meter Company along with shareholders John and James Hunter developed a water-driven ceiling fan in 1886. The fan earned the company fame and glory even beyond US borders.

Apart from a few imported appliances Hunter Fan Company remained mostly unrivalled despite changes of management for about 100 years. Only in 1974 did the energy crisis bring about another manufacturer of energy-efficient ceiling fans: The Casablanca Fan Company from California. Despite an enormous advantage you might wonder how a company could survive financial crises and ever-growing globalisation for more than 130 years? The answer is simple: Hunter always has placed emphasis on innovative and decorative fans that are superior to conventional models. The enterprise continues to follow this code of practice today. The first simple model from 1886 has naturally been developed and improved over time. The products improved regularly to keep up with state-of-the-art technology. At the same time the company invests in good marketing. Despite new inventions and cutting-edge standards the values of the company’s first years are still practiced: Quality, Design and Innovation.

In the year 1906 designers respond to the rapidly growing power grid and developed electrical ceiling fans. It was one of the first devices that were powered by electricity. In private households these fans were installed beginning ca. 1920 which correlates to the implementation of a public power grid. Initially, only well-off families were able to afford this new convenient invention. However once the power grid spread out further and mass production began, Hunter ceiling fans gained great popularity. Even the first models were advertised as being compatible with electric lights.
Hunter continuously updateed their product line to comply with current trends and requirements. Due to the electrification of households oscillating desk and pedestal fans were introduced to the market. During the Second World War Hunter supplied extractor fans to US Army buildings and provided portable devices to the Navy. With air conditioning systems on the rise Hunter emphasised the energy savings in combination with a ceiling fan. By using both appliances together, the air conditioning system can be turned down more. This resulted in energy savings of up to 47%. In fact, the combinated system of AC and ceiling fan has become standard practice in the US. However, the expansion of the product range was not the only reason for Hunter‘s success. Revising the management was just as impactful. Starting in 1986 Mr Clouspy introduced a decentralised management with four presidents of one department each. The teams supported each other but also had enough flexibility to work creatively on their own. The devices were sold at affordable prices by wholesalers such as Wal-Mart. This decision contributed greatly to the popularity and extension of Hunter fans. Naturally all products showed outstanding quality. Being one of the first sellers in the ventilating industry, Hunter saw that ceiling fans could be combined with interior lighting and began constructing their devices accordingly. Easy handling and use were guaranteed by control via remote as well as water-proof lacquers to offer more convenience to their customers.

Extensive advertising campaigns including updating logos, uniform colours scheme in green, high-quality product images, TV spots and two-page ads paid off. Not only did Hunter advertise with appealing photographies, but also carefully explained to customers why exactly fans are the more efficient solution.

No ordinary off the rack fan: Hunter craftsmanship

The inspiration for new Hunter ceiling fans comes from fairs, publications, general trends and observing designers looking to improve everyday things. All materials perceived in shop windows, nature or exhibitions can be found in blades, for example. Patterns are not generated by computers, instead they are hand-drawn in Memphis. The passion for loving details results in lights with weathered metal finishes, colourful glass and textured surfaces. The designers test colours in a paint shop, they carve, scribble and consult until they are fully satisfied with a design. Only then will it be used in mass production.

Customer favourites in our online shop include the Hunter Builder, Bayport and Caribbean Breeze


Motivated industrial designers such as Alex Haggar from Memphis are happy to take on the challenge of designing a ceiling fan. For example, the motor and blades require a certain size and weight to be functional. In addition, the fan is a visible, obvious element in the room so it is important to think of an appealing look. Furniture and lighting are a fascinating topic since they can be used to create and enhance certain atmospheres and moods. Haggar emphasises clear, “simple” lines with a personality. Currently the designer team is working on implementing LED lights on all Hunter fan lights.
⭢ Interview with the designer

On top of that Hunter always gives customers inspiration for their own interior decoration. On their website and Facebook channel the company introduces styling tips. Furthermore, the “Huntervention“ team regularly goes on trips to make over homes and ventilators of their supporters.

The success of Hunter ceiling fans is based on the combination of motor performance with an appropriate size, shape and distance of the fan blades. Each year about 3,000 drafts are made, but only about ten percent are actually turned into real prototypes. Only the best models end up being marketed. Those models go through a variety of test procedures that are sometimes even more strict than industrial standards. The blades and their components must endure a bath in saltwater as well as exposure to UV rays and water pressure. The blade holders go through a “shake test” where they are shaken thousands of times to ensure wobble-free operation. The electric parts are checked under artificial increase of temperature so that the service life of the motor is guaranteed. However, this is still not enough for Hunter engineers. In fact, they developed their own testing procedures that exceed industrial standards by far. The whisper-quiet motor operation for example is controlled in a sound-proof room. Any jerking, bleeping or buzzing of prototypes are optimised until the product is finally soundless. The teams of research and development are working together in close cooperation.
Construction engineers and designers in Memphis as well as in all other production facilities world-wide adhere to the in-house standards.